The boiler is the power supply for the engine to get running. A boiler is a transportable power plant that delivers the energy source to the steam engine putting the train in motion.

At the boiler and around the boiler there is a lot of additional hardware, but required to get the best result of the boilers main target. “The production of steam” The inside of the boiler has been viewed already and now the external hardware is now magnified.

A steam driven turbo generator provides the electrical devices of electrical current. This current is needed to enlighten the cab, the head and rear lights, the AWS or other signal safety devices, the exterior light that lights the driving wheels and additional lights if necessary. 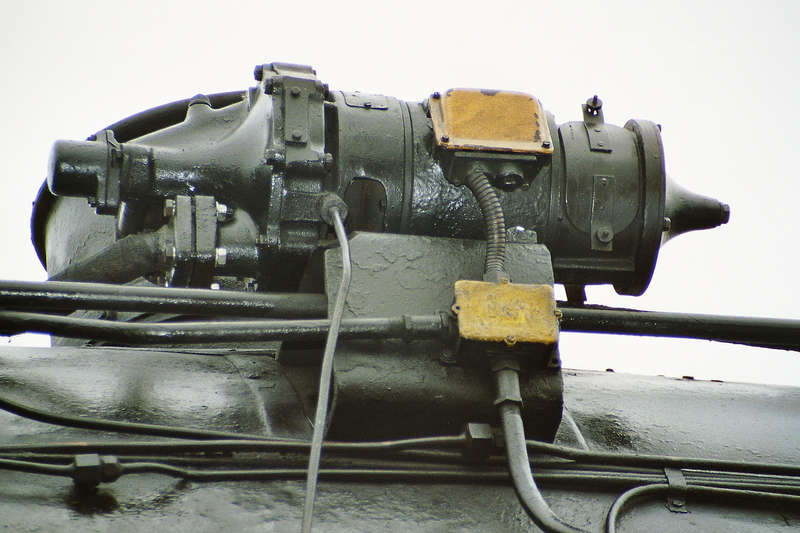 The common turbo generator installed on the German “Einheids lokomotives”

The turbo generates electrical power. The mass is directly connected with the boiler, that acts like the mass or negative pole at the engine.

The wire is the plus (positive) pole that is fitted in a small tube that leads to the cab main switch board which is mostly mounted above the windows.

The class 03 and 95 are equipped with a operational turbine driven generator and switchboard. 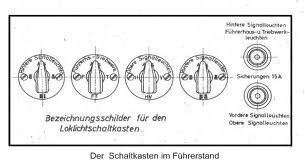 The lay-out of a German switch board

To operate the turbo and switch board, rotate very slowly the spindle valve clockwise that opens the steam flow to the turbo setting to rotator in motion. the rotating fan blades inside the rotator start to spin around picking up speed until about 5000 rpm producing mostly an 24V electrical current.

The switch board divides the currency to the desired devices and lights. On modern engines the electrical current is also in use for empowering the safety devices and to load battery pack in case of a malfunctioned turbo generator. 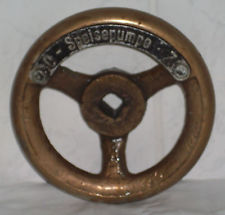 A common spindle which is present in almost German build steam locomotive. The spindle is manufactured in different sizes. The name plate shows this spindle is to operate the water pump the “O” represent the “Valve Open” as the “Z” represents “Valve Closed” 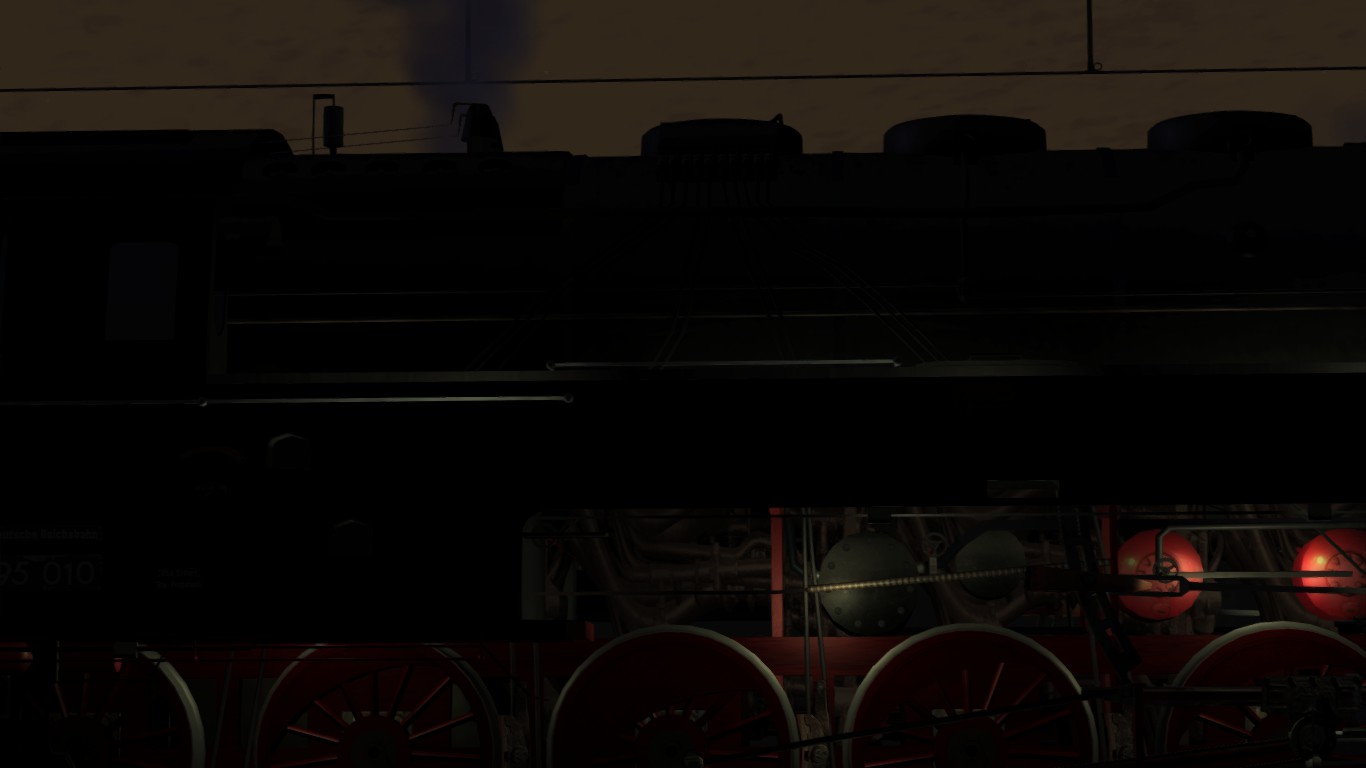 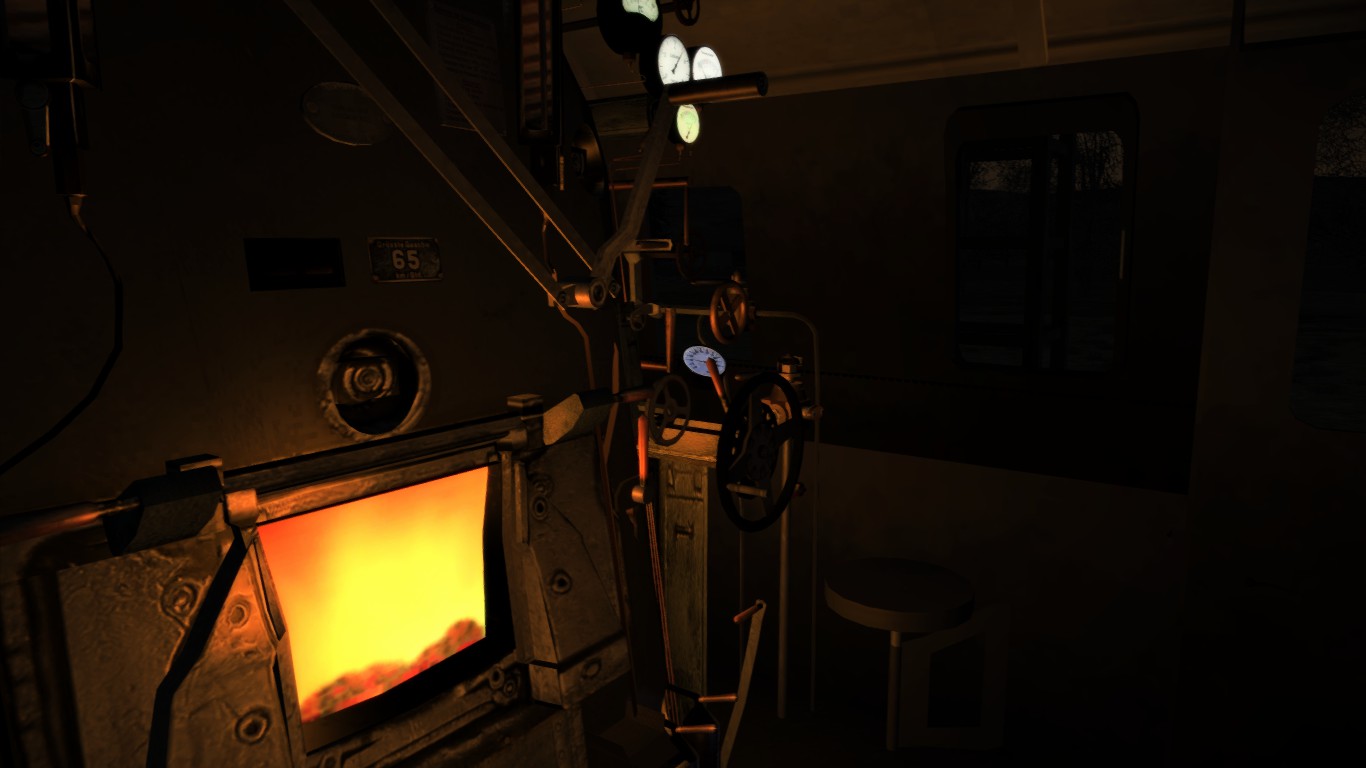 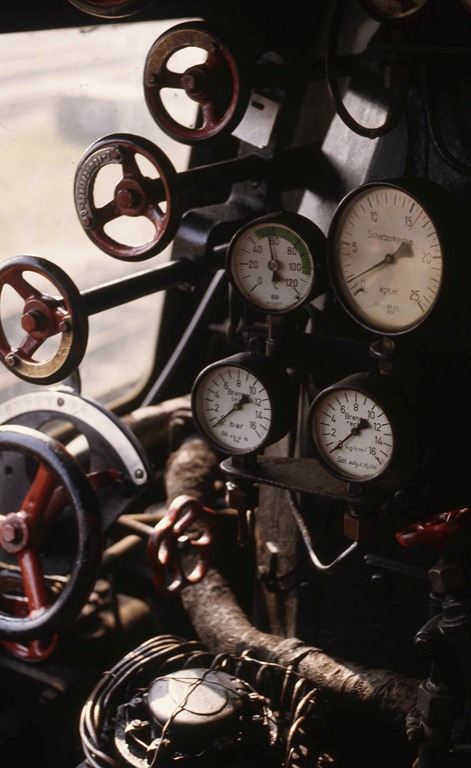 The Spindle that opens the valve is mostly installed at the fireman’s side and situated at the upper left side above the blower spindle. 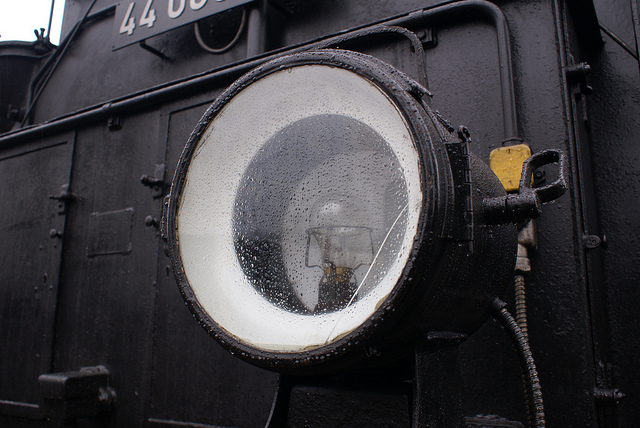 The rear light of an engine. A red filter can be applied when the engine is driving head first. 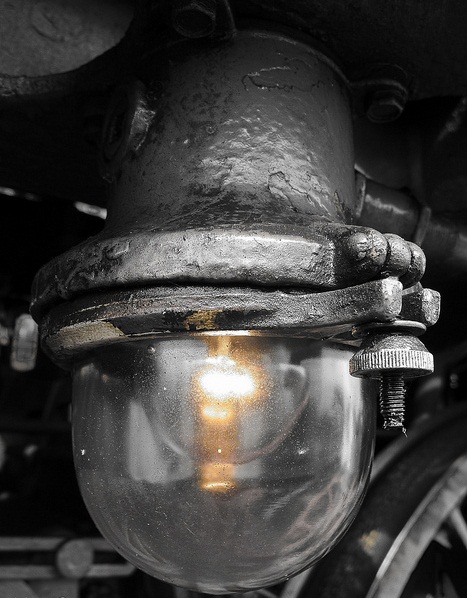 The armature with light bulb to illuminate the driving wheels for inspection, lubrication and preparation purposes.

During the run the whistle is a hard and loud phonetic signal that can heard far away of. The frequency in Hz of a whistle blow sound is widely audible and it will trigger the attention from almost everybody in the area close to the railroad. The right frequency is the source for the length in distance the sound carries away. This whistle is the common sound for approaching danger.

Secondly the whistle is to communicate between a double headed train. The first engine gives a certain whistle signal and the second engine respond to this whistle blow to confirm the signal from the first engine. Every country does have their own rules accordingly double head driving signals. 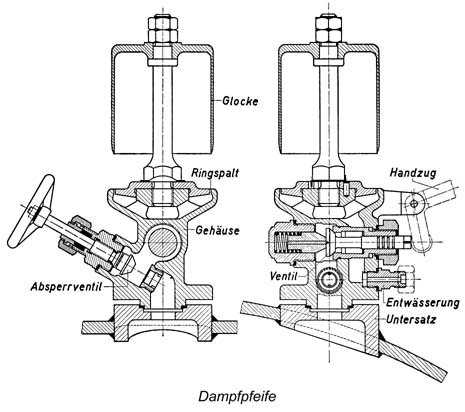 The diagram / drawings shows the whistle and the operating facilities. 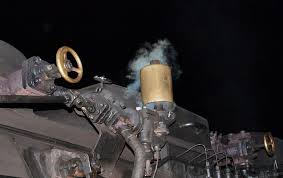 The valve has to be open prior to the proper working of the whistle and needs to be closed when the engine is depressurized. 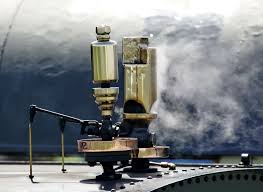 The whistle of a local branch line steam locomotive.

This whistle is used because of high whistle sound and often in use on local services on short distances and small engines. This type of whistle is mostly manufactured out of brass and copper. The polishing shinning effect the locomotive crew created was always known by everybody no matter which country or area the locomotive was running. The brass whistle was a famous point of recognition. 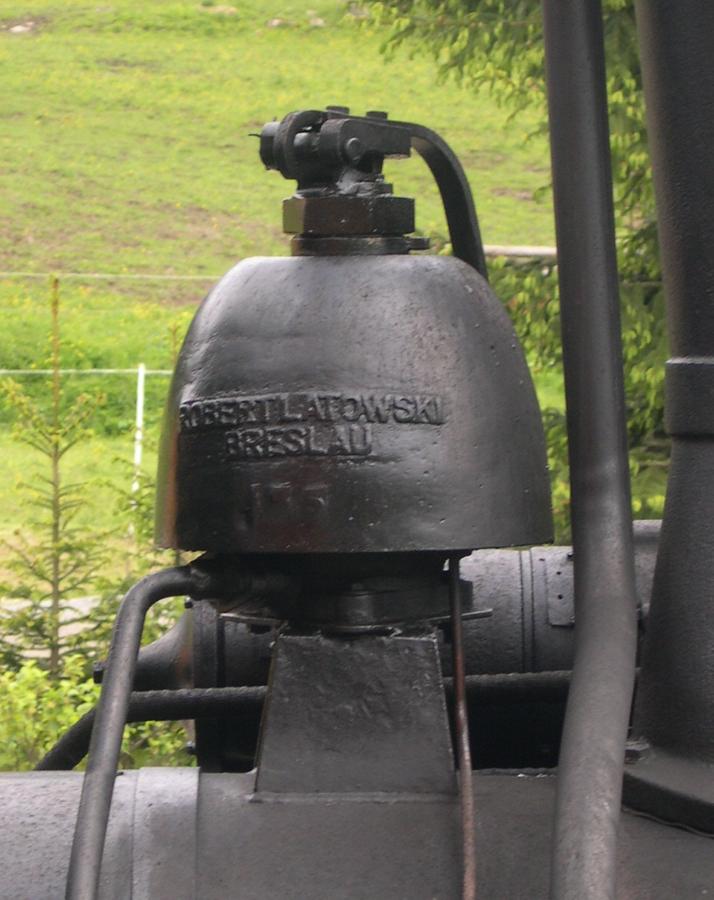 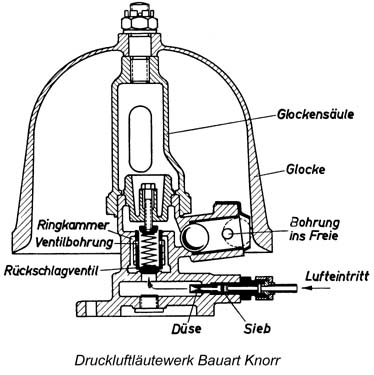 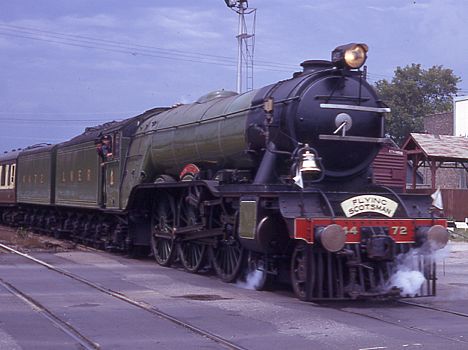 In the USA a Bell is required by the NORAC and every engine is equipped with a bell even the Flying Scotsman on its tour throughout the USA received a bell and a typical USA front light, 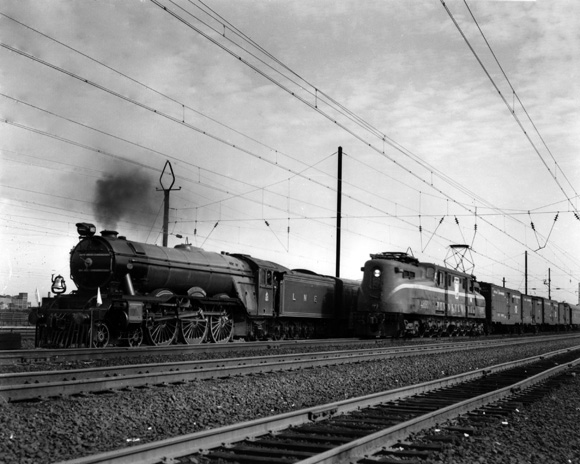 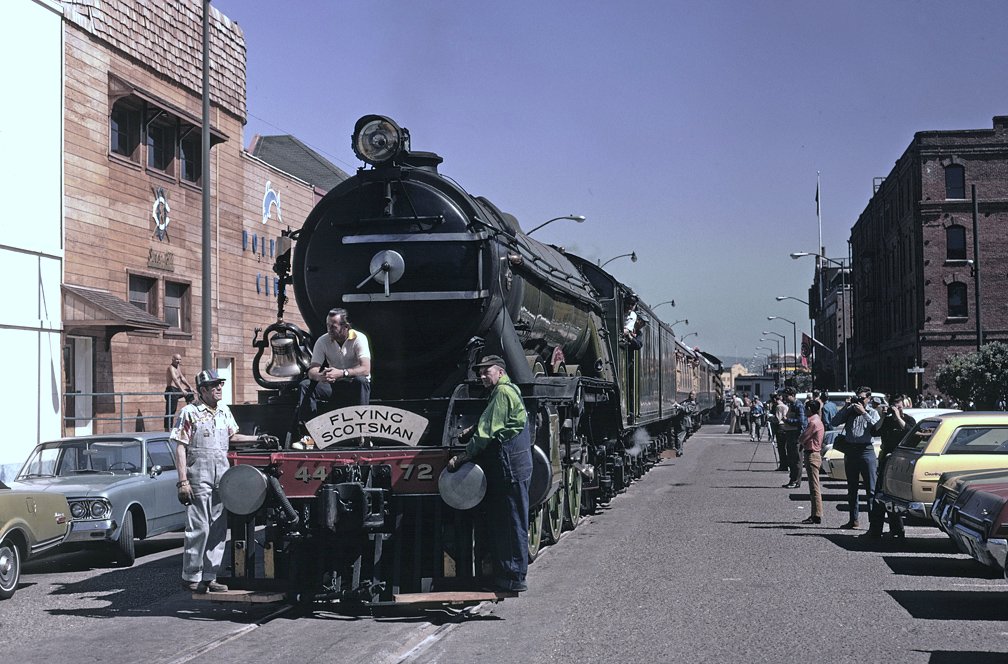 The Blow Down valve

Calcium sediment (slug) forms when water is boiled. After a while the calcium (limestone) will sink down to the bottom of the boiler ot on top of the crown plate. The sediment does not evaporate with the water into steam but remains behind in the boiler. During stationary periods, prior to a run or after a service when back on the shed, depot or workshop. A blow down is needed to release the sediment out of the boiler.
A special engineered valve by Ing. Gestra will release the sediment when operated.
The operation lever is installed at the footplate next to the fireman’s seat in German engines. Other engines does have other systems to release the sediment. The operational sequence.

If necessary repeat the sequence for a second time when the blow off could not be conducted in 30 minutes.

During the run use the Gestra valve about every 20-30 minutes when possible. This could be on departing the station (max. about 10 seconds), passing a bridge. in natural environment like wood areas, country sides, shunt yards when possible.

The Gestra Blow Down valve 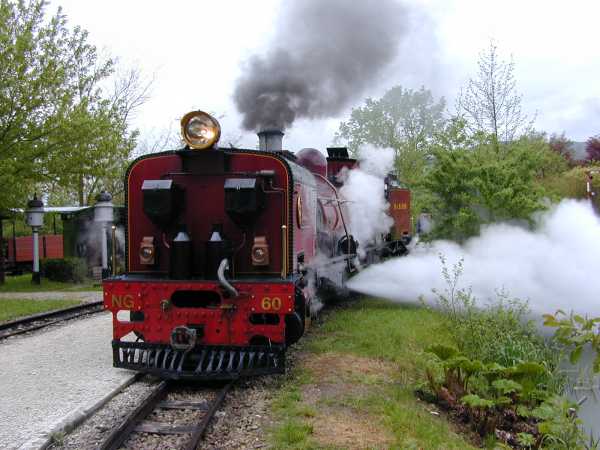 A blow Down of a Garreth engine.