Engineers were continuously seeking for method to overcome economical issues trying to find the best advantages and profitable ways to create steam effectively. Even after the war the request to get the best for the lowest price resulted in overhauling engines to re-establish the transportation and infra structures and economical contribution in the shortest period of time.

To achieve this target engineers start to reconstruct the steam boilers in high performance boilers that could last longer producing more steam on an average steam locomotive. Coal became ineffective and was expensive. The solution was to install special burners into the firebox to burn heavy oil. Heavy oil was cheaper than coal. 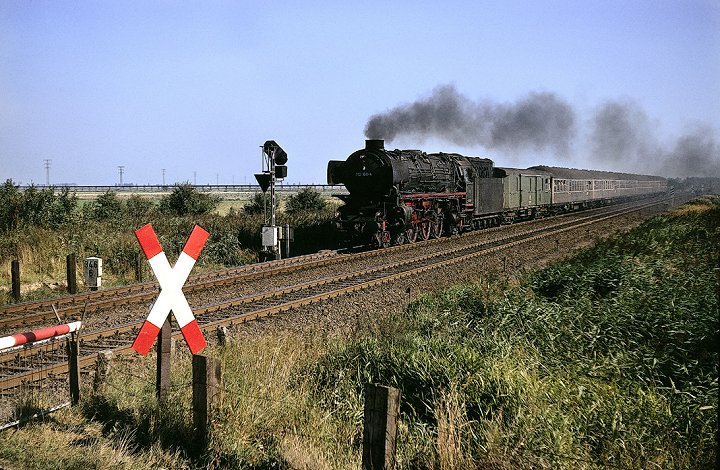 An oil fired Pacific class 01.10 along the Emsland route in1973. The last Express train that ran with steam was in may 1975.

The profit rate of heavy oil was even higher than the profit rate of coal. Firing the engine became much easier and the use of heavy oil made it possible to switch off the fire when the engine is stationary. New steal boilers were welded instead of riveting and lesser steam domes were present. The fireman has less work to do and the physical stress due to the duration of shovelling was eliminated.

Engines that remains on coal firing were scrapped 5 to 6 years earlier prior to the scrapping of oil fired engines.

The oil firing in TS2015 works the same as coal firing. Actually the meaning is different

Starting up an oil fired engine

To fire up a oil fired steam locomotive you need to have pre heated oil the viscosity of heavy oil is like thick syrup and needs to be warmed up to get the oil liquid to flow. Now when a pre heat system is not present the oil needs to warm up by an extended heat source. This is usually a coal fired engine. The steam produced by the coal fired engines will heat up the oil in the tender up to a 110 degrees C. 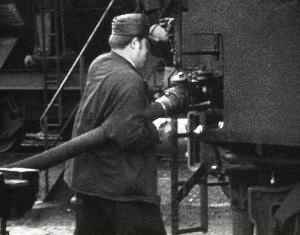 The oil that comes from a bunker is already warmed up until 110 degrees C. and can be pumped into the tender.

The oil now can be pumped with the use of the external steam source through the atomizers that are installed just above the fire grate. This fire grate does not have the coal grates but does have a few bars between left and right to let the air through. 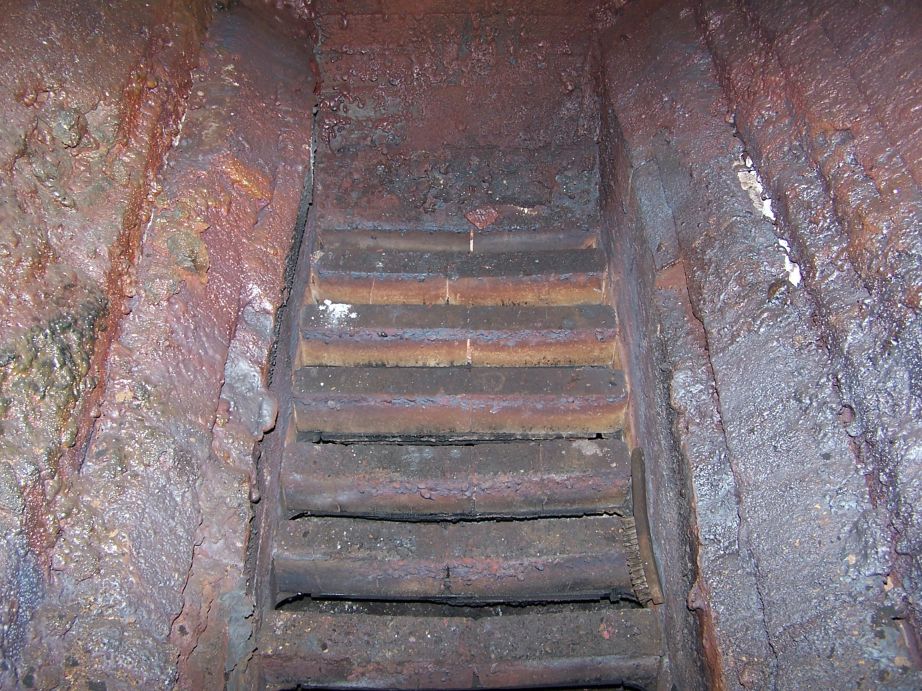 The fire grate of a oil fired steam locomotive. Mention the rough bars at the bottom of the fire grate. 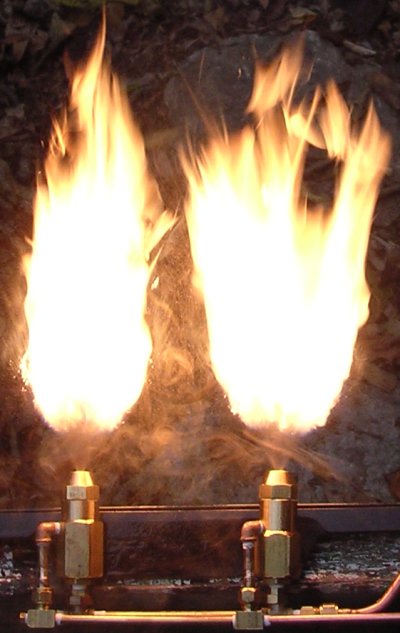 An atomizer sprays the oil into the fire box using two nozzles. The nozzles are mentioned in the diagram and shows the working of the oil atomizer. 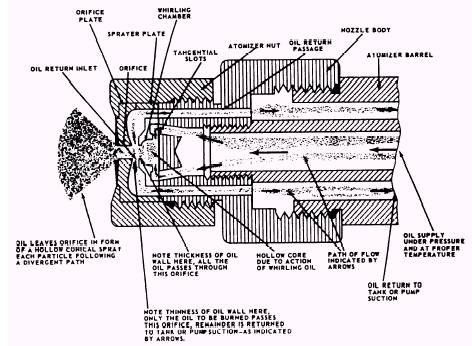 The view of the nozzle is described in the diagram here. The atomizer is just an example of the fire it creates. However the heavy oil atomizer is much greater than the gas atomzier shown here.

The firedoors does have a small gap for two reasons.
1 – To check the fire.
2 – To insert sand. 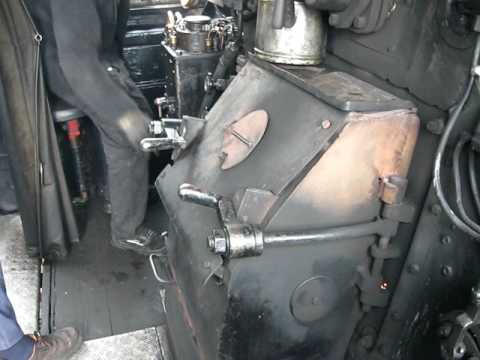 Sand is used to insert into the fire box to clean out the tubes and pipes. The sand acts like a grinder that “grinds” tubes and pipes surfaces from adhering oil and/or tar. The sand forms small chunks of tar that is blowing out through the chimney or falling down in the smoke box. These oil components are non-combustible and if not cleaned these oil/tar will result in the same effect as lime scale in the boiler itself. 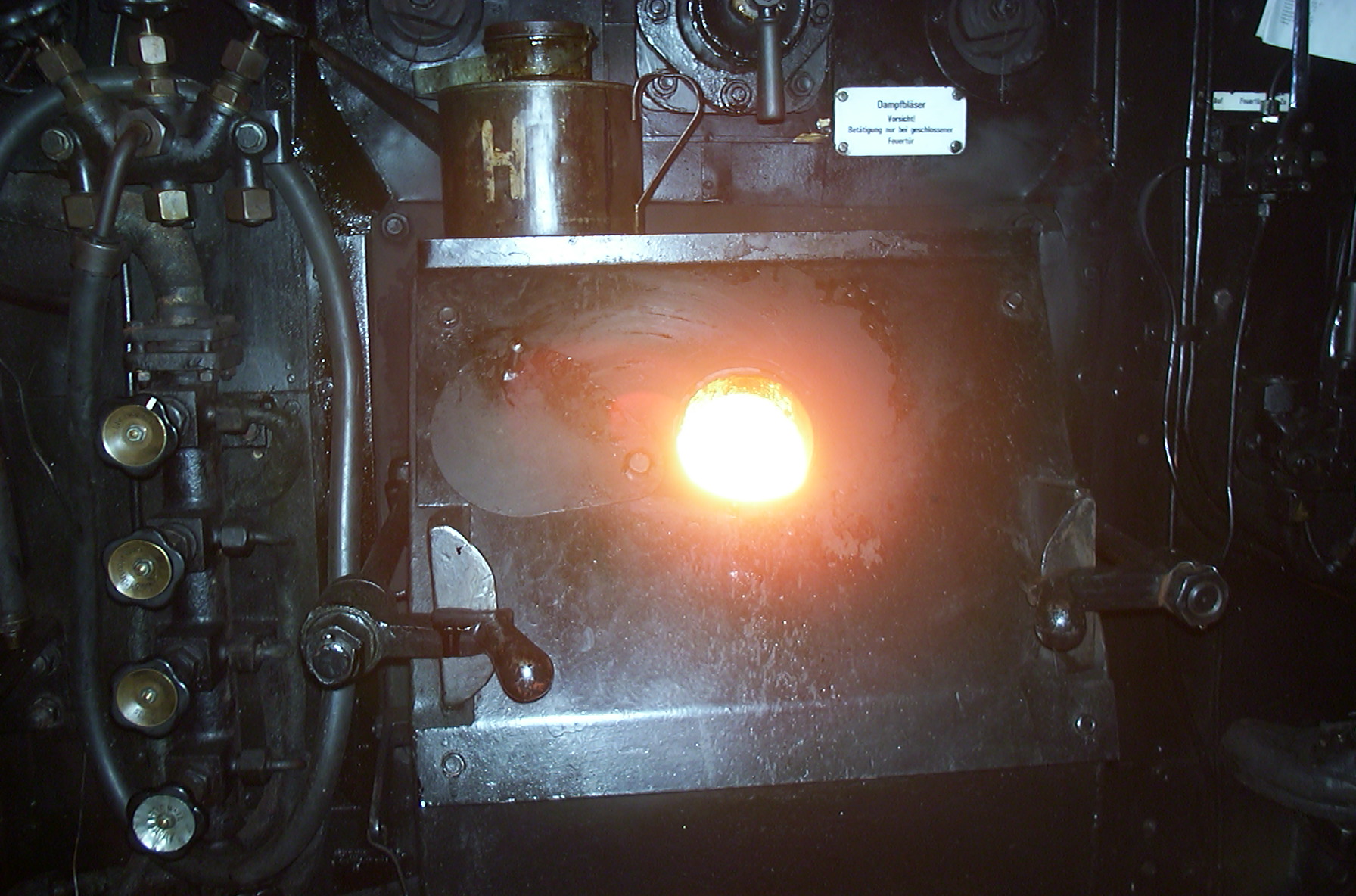 The two nozzles / atomizers are separately adjustable. Every nozzle works fine when the oil pressure is balanced at about 2 Atm. per nozzle. The high temperature ignites the oil directly creating the super hot gasses that is lead into the tubes and pipes generating steam. The pressure that the nozzles contains are separately readable by gauges that are installed in front of the fireman. 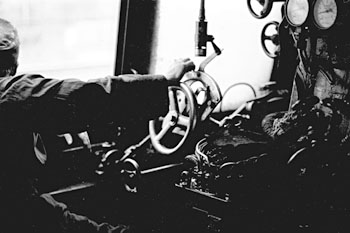 The fireman adjust the amount of oil by slightly moving the hand wheel which is also locked up by a safety screw of locker.

Close to the fireman a bucked of sand with a small shovel that is used for insert sand through the gap in the fire box door. The fire box door is only opened for maintenance and is locked up with the lockers that are present at the side of the fire door. 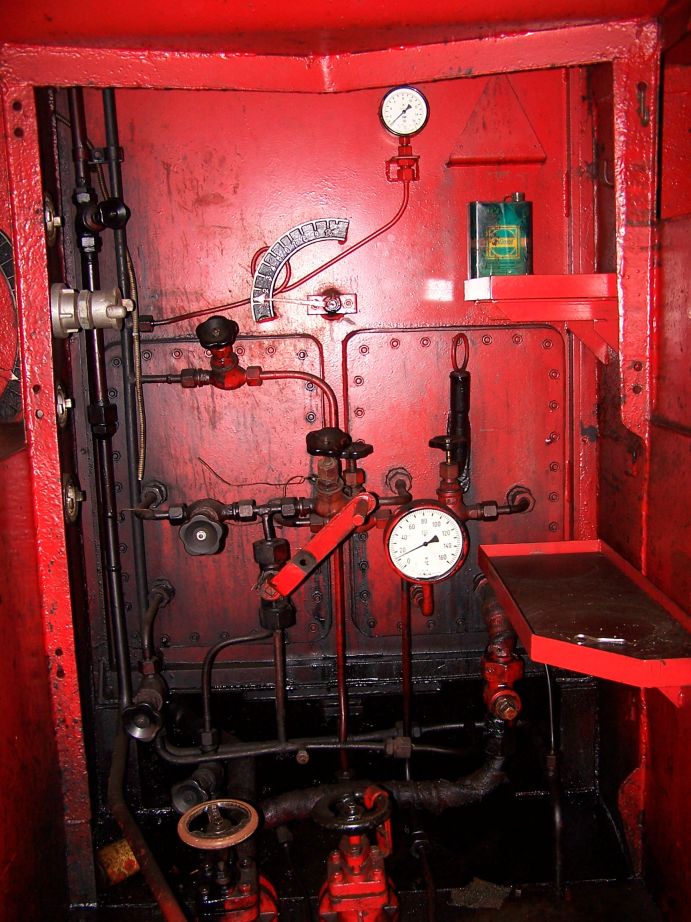 The front of the tender contains valves that regulates the steam into the oil for warming up the oil until the desired temperature is reached. The pressure and amount of oil present in the tender can be read at the gauges. 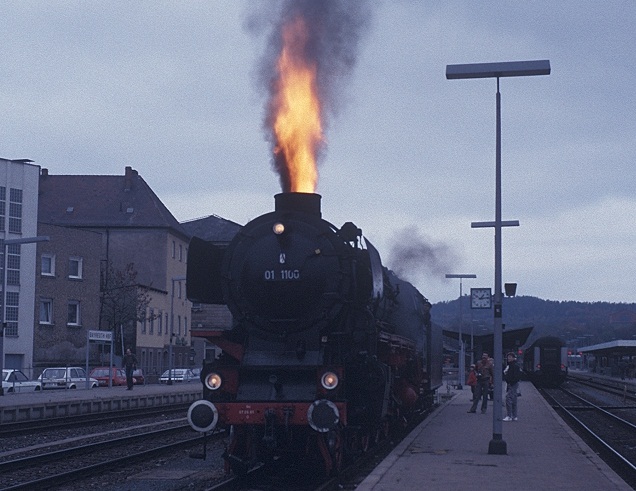 When an engine ingnites or extinguish the fire, a blowtorch is the result to the last oil that is remanent in the pipes and tubes and are igniting causing the blowtorch. 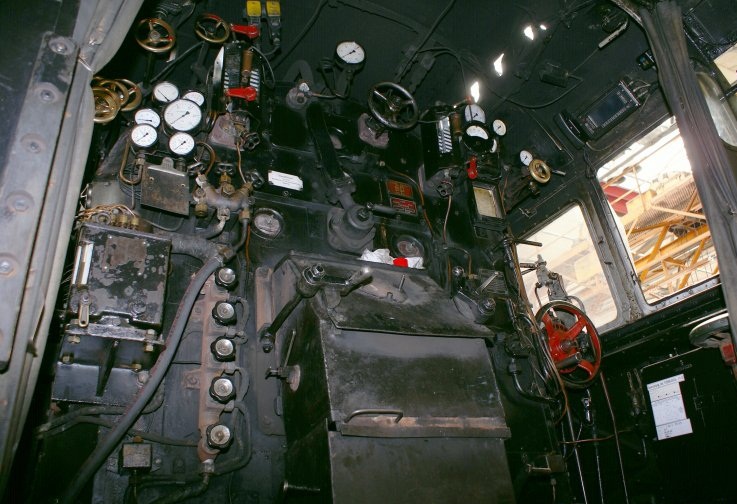 When heavy oil is pushed through the nozzles in the fire box a second nozzle blows steam under high pressure against the oil stream from underneath that atomize the oil which ignites immediately. the steam injection and the oil flow can be operated separately and can be fine tuned due to a series of valves which is installed left from the fire door. 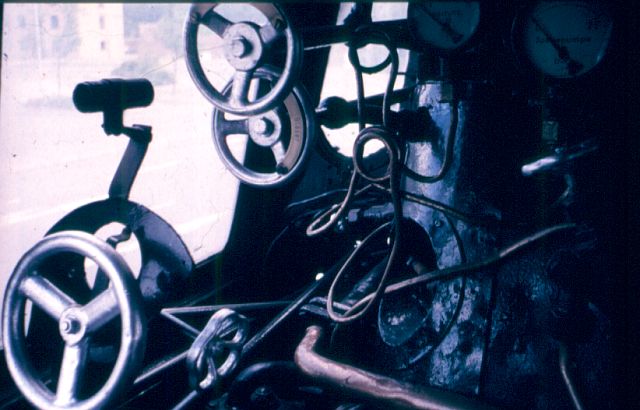 A closer look to the fireman’s workplace showing the spindles, levers and gauges. Above the main spindle the regular spindles for operating the blower, the injectors and the turbo generator. 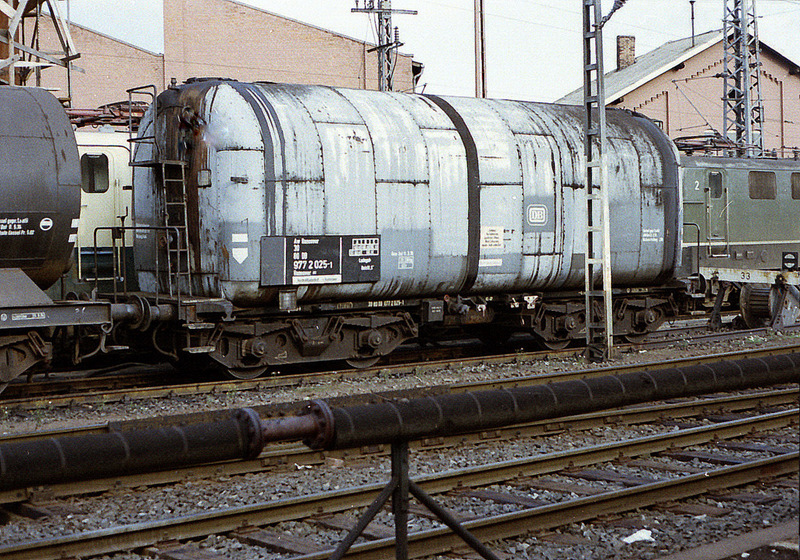 Special isolated tank wagons delivers the heavy oil to the bunkers at German depots near the sheds and workshops.
It was even possible to top up the oil supply directly from the wagon itself if a bunker storage was not present. 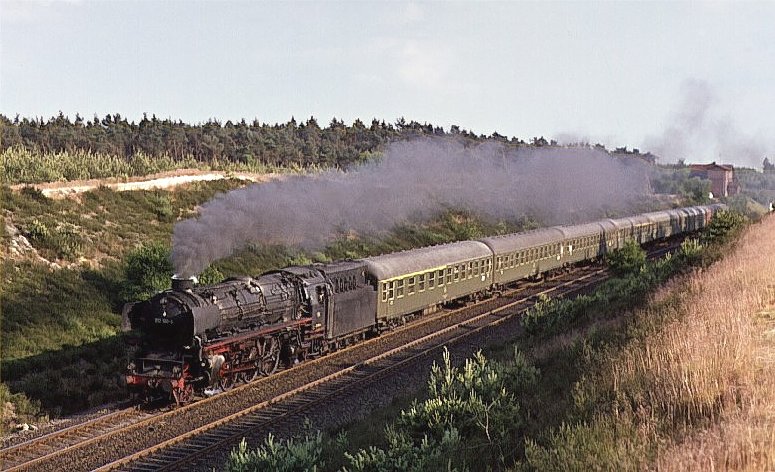 An oil fired Pacific at the Rollbahn, This route was recreated for MSTS; German Railroad Nr 5. 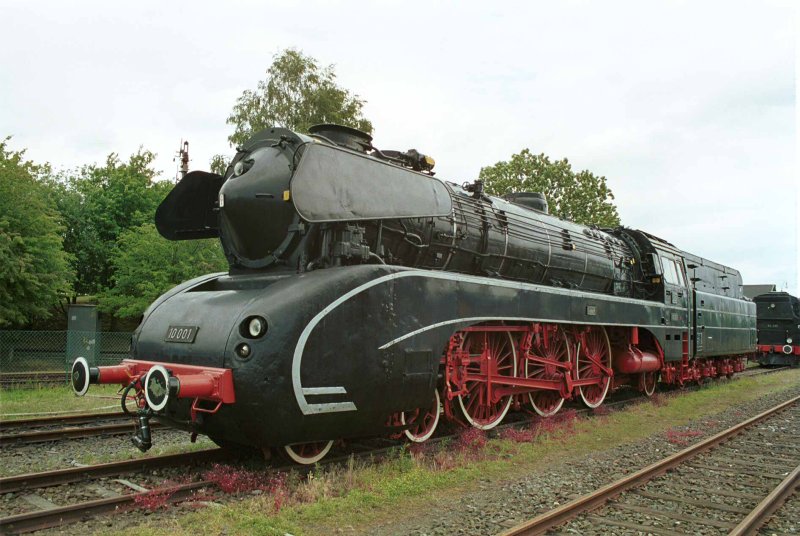 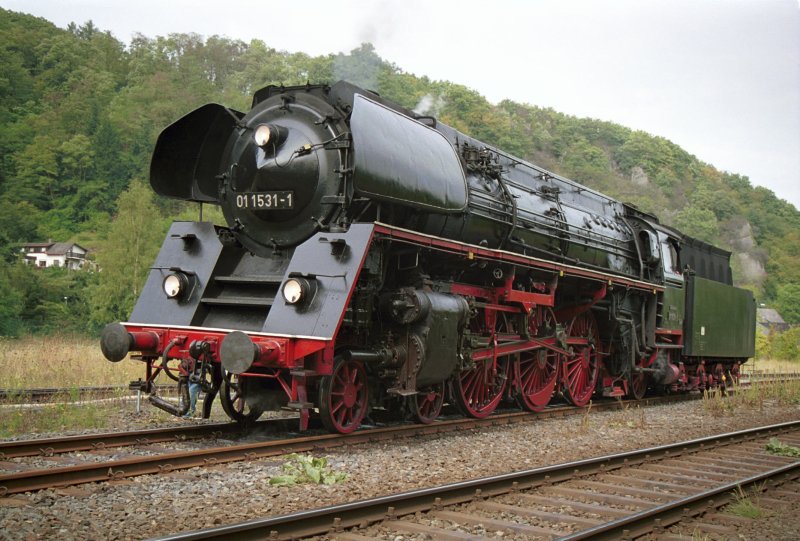 The DB developped a Pacific class 10. Only two were build. These engines could be fired with coal and oil. The DR created the highest efficient boiler in Europe. The reconstructed Pacifics 01.5 were fired with oil and coal firing. 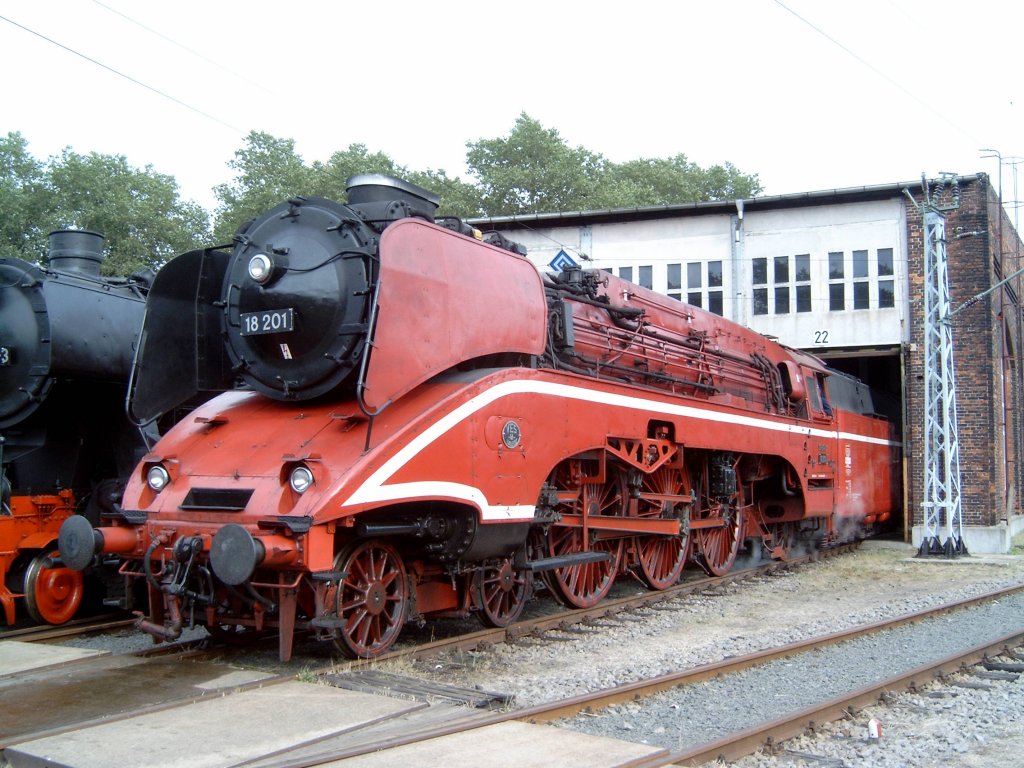 The special recreated 18 201 which was made out of the class 61 Henschel-Wegmann trainset is one of the fastest steam locomotives in Germany that is fired with oil.

The 52 8055 is recreated by the Swiss compagny DLM at Winterthur. The engine is fired by light oil and one-man-operational. The sliders at the crosshead contains roller bearers and approved for 62 Mph / 100 km/h. 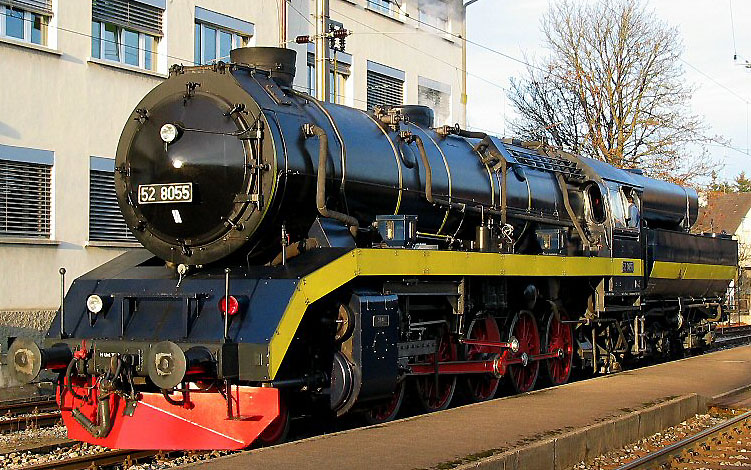 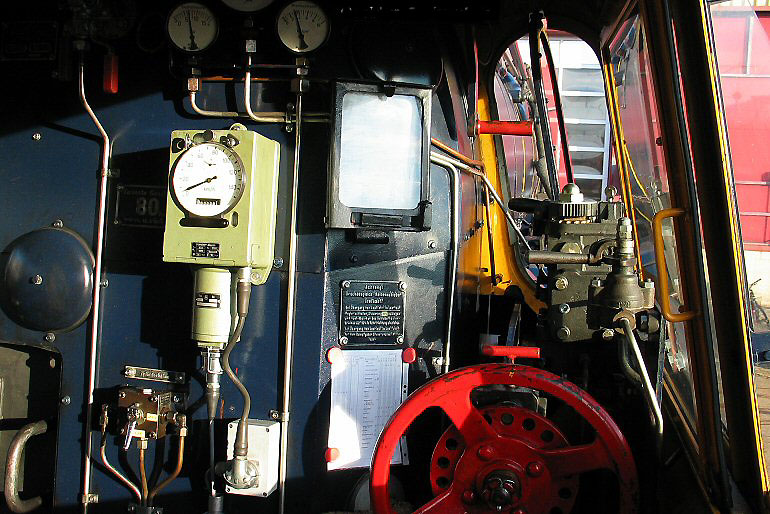 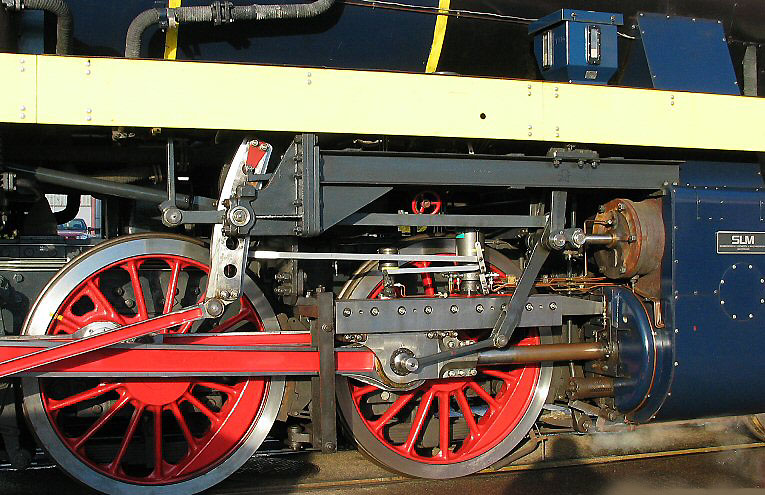